Sara is a personal assistant to Evelyn, a demanding, Southern California Reality Show Housewife. Sara occasionally appears on Evelyn’s reality show, but she does not seek fame—far from it, in fact. Not the same can be said about Sara’s plump wannabe-fashionista cousin, Bridget. Maybe a little overconfident, Bridget wishes she was famous and in her mind she already is. After a disappointing birthday with her immature boyfriend, Sara joins Bridget and Bridget’s socially awkward new co-worker, Erica, for a night out on the town. The celebration goes awry when Sara’s scathing rant about her bitchy boss, Evelyn gets captured as a voice text and accidentally sent in a group message to all of the reality Housewives by their burly female “Ride” driver, Jo. Sara, Bridget, Erica, and Jo get invited to appear on The Housewives’s “live” Reunion show to explain the situation surrounding the text. Little did they know their short, chaotic appearance on television would turn their lives even more upside down. 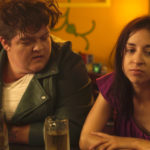 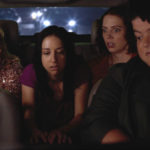